Oh lovely day today!  Been sewing off and on since breakfast and now the postie has just delivered a big parcel.  It’s my latest fabric order for some new items which I will be making up very soon!  I love opening my fabric parcels –  all the new unused fabric with it’s perculiar ‘new smell’.

Watch this space for what I create!

I decided I’d make my husband a present a while back and as he isn’t really into patchwork and flowery fabrics but is a Dr Who fan I tried to buy some Dr Who fabric.  This wasn’t easy to find and when I did it was very expensive!  Spoonflower have some really good Dr Who fabric but I didn’t want to spend that much!!  So anyway as I was trawling through ebay I came accross a Dr Who duvet cover and pillow set for sale!  It was from Next and was advertised as in really good condition so in a flurry of excitement I made a bid!  Amazingly only 1 other person bid and I immediately upped my bid and won the auction.  Woo Hoo!

Well the gamble paid off as the fabric was in beautiful condition and had a tardis on the front and some daleks and a cyberman too!

So first I cut out the Dalek from the pillow case and sewed it up stuffed it with an old duvet filling.  It makes a really nice cushion! 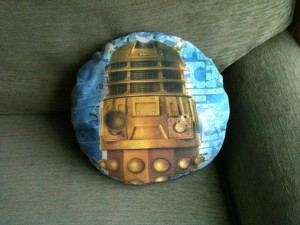 Next I cut the bottom of the duvet off and sewed it onto another piece of fabric to create a pocket and made a tool belt! 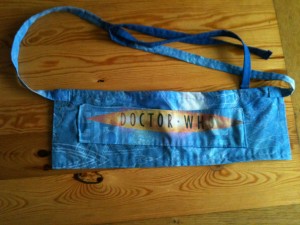 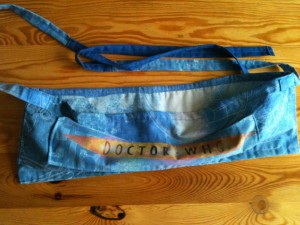 tool belt with dr who text

End result is happy hubby!  I am not sure though if I have done anything wrong by using the fabric.  I think I can’t sell things like this but I presume it’s ok for home use only. Anyone know?

Well I’m off to Handmade Monday to see what everyone else is up to!

Gosh I am wiped out today!  Yesterday started really well – Daughter, grandson and I set off for Manchester airport to pick up one of my sons who has been living and working in Australia for the past year.   We found the car park easily and made our way to ‘Arrivals’ where the board said his flight was ‘on approach’!  Woohoo – just time for a coffee before the big reunion!! 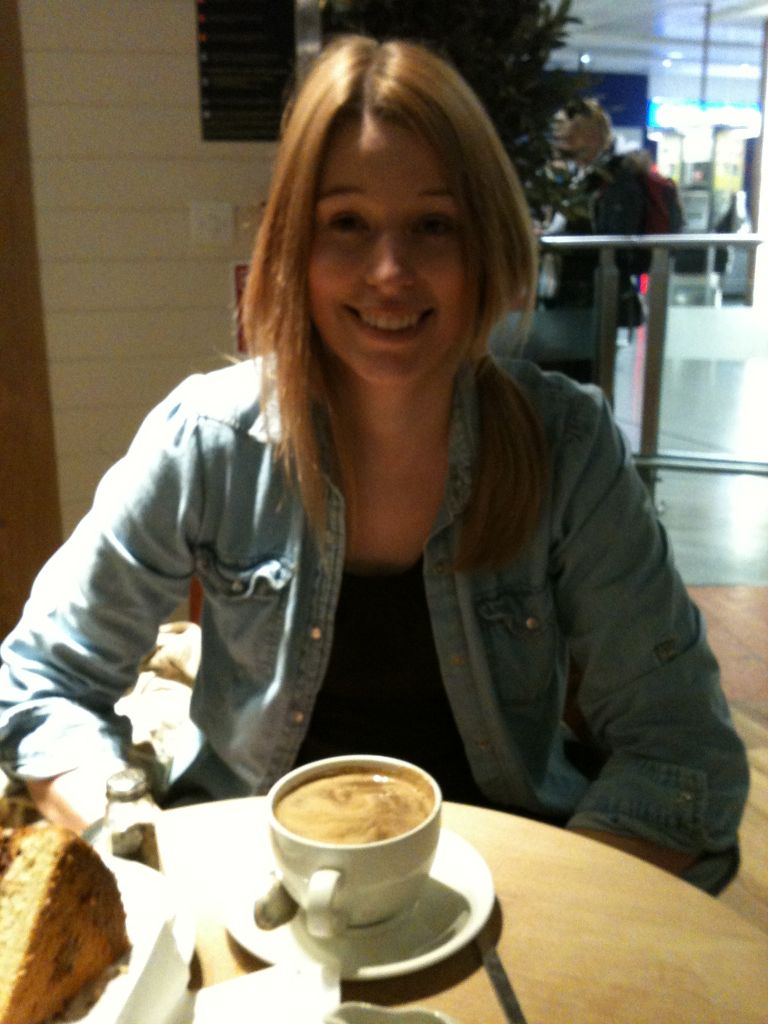 So we had our coffee (and HUGE slice of Victoria sponge cake between us!) and watched all the goings on.  (I can thoroughly recommend Joe’s Cafe at the Arrivals area at Manchester airport – good coffee, lovely home made cake and very pleasant and helpful staff!)

So far so good!  Then it all went horribly wrong – basically we waited an hour with me breaking into smiles, and even on one occasion Wayhay-ing, at every young man who had short brown hair and a rucsac….. none of them was actually my son… 🙁

DD went to talk to the enquiry desk lady who told us all British Passport holders had gone through although there were two people detained in customs.  At this point my mind went to Mars and back… all the awful stories of people having stuff put in their luggage unbeknown to them were now presenting as scenarios and I was in tears.

So to cut the misery short I will say that after a trip to the airline desk we discovered our Jon was not arriving till the same time tomorrow!!!!  I had got mixed up with flight times and time differences etc and there was nothing we could do but drive back home – me as a wet rag – and DD upset that she wouldn’t now be able to see him arrive as she works on Tuesdays!

Now I am sitting at home waiting to repeat the adventure, though this time fog has descended and his flight is delayed 2 hours! Yesterday the flight arrived 20 mins early.

I just hope he doesn’t fall asleep and miss the flight call!!!!

This week I haven’t made much as after last week’s giveaway from Wendy at Handmade harbour I was inspired to try and look at my craft business from all angles and see how it could become more commercially viable.  I had really enjoyed reading the snippets from the ‘Commercial Creatives’ book which was one of the prizes,  and as I didn’t win,  I decided I would buy it.  I love ‘real’ books but they can  be heavy and  I have a Kindle it seemed the obvious choice to choose the e- download version.  So woohoo, within a few moments I was reading the book.!  If you missed the post last week here is a  link  to the book.   So far I am lapping up every bit of advice and information.  I haven’t read it all so will review it again when I have finished.

Looking critically round my craft room I was  thinking  that it is just too messy and haphazard to inspire my creativity.  Then under a heap of (haphazard) patchwork squares  I found the lovely little photo album my daughter bought me for christmas with idea being that I take pictures of all my work and stick them in the photo album as a showcase for all the things I make.   Then I have something to take with me to craft fairs for people to browse through and maybe ask for a custom order!  So now I am collecting all my items and printing out pictures of things I’ve already sold ready to stick in the album.

Hopefully I will have a showcase album soon which I will take a picture of for this blog!

Happy blogging and crafting everyone

Having had two sales on folksy recently I am really pleased!  Only thing is now I need to make more items and I have a craft fair coming up on March 2nd!  A major problem for me when I am in my craft room is being distracted from making things by keep taking out my lovely fabrics, giving them a stroke and imagining the lovely things I will make with each piece.

However this does not reuslt in lots of completed items,  just a long dreamy state ending in a cup of tea and another ‘where did the time go’ feeling.  So what does everyone else do?  Have people got a rigid working from home timetable?  How do you fit in housework, visiting relatives and Granny duties?

Anyway here is my choice for my next Spring time items.   Not the same spring Wendy means over at Handmade harbour though!! 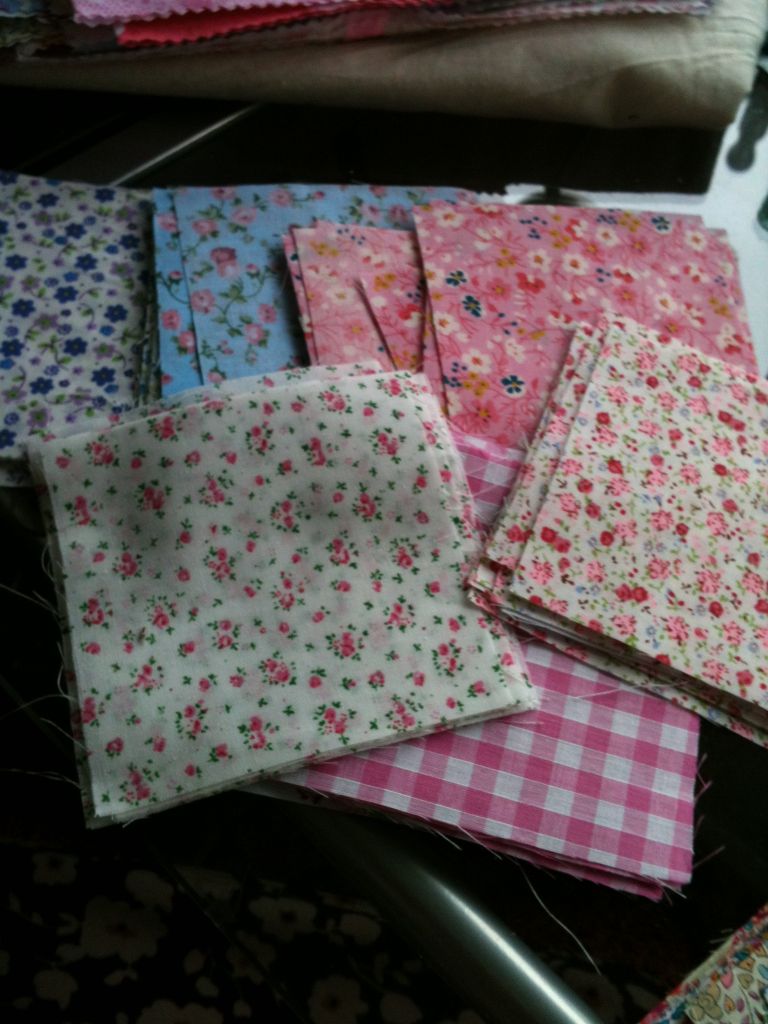