I have rekindled my love of crochet!  My Aunty Pol taught me as a child and many hooky projects have graced our home through the years.  As a new stay at home young mum I cut up and hemmed old sheets to make cot and pram sheets, crocheting all the blankets in bright woolly colours and knitting little cardis!    Even before the children arrived I made my own maternity clothes and breastfeeding nighties.

All that crochet,  sewing and knitting in those days as well as looking after the family – makes me think I had far more energy then than it actually felt like at the time!   Of course, in the early 80’s  we just didn’t have the range of low price shops which there are today and there was no online shopping so many of us had to make our own things. I made clothes and toys for the children and curtains for our house,  I enjoyed it all so it never seemed a chore.   I remember one Christmas the boys longing for the ‘Teenage Mutant Ninja Hero Turtle’ figures were very scarce and so I made both the boys a furry version which they loved and carried around for a long time!

my son with his home made teenage hero ninja turtle!

Anyway after visiting Yarndale, buying the Hooplayarn and reading various blog accounts of the day  I have begun crocheting again. Amazingly I had never heard of Lucy and Attic 24 before – her blog is a wonderful find as it has lots of tutorials in very easy to follow style.    I now have a set of red bowls from the Hooplayarn and some granny squares destined to become a big throw!  Only trouble is – these days I need a rest even after just sitting down crocheting!

Talking of rests – what better than a stroll round the Handmade Monday blogs over at Handmade Harbour!

Anyway I love reading your comments – if my site won’t let you please do let me know on facebook as it was a bit iffy last week.  Thank you! 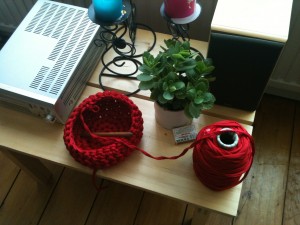